A downloadable game for Windows

After being sent to Mutsuki Catholic Middle School for Girls over the summer to spend three weeks there, the uninterested students are quick to find any resemblance of fun. Staying up late past their curfew, a group of students talk about the popular rumor that's been floating around the school. Supposedly, if you go to the church and sneak into the second confessional booth at 3 AM, starting a confession like normal will cause the spirit of a priest to answer from behind the latticed opening. If you don't confess your greatest sin, it is said that he will haunt you forever.

Skeptical, a girl and her friend feel the need to prove to their group that it's just a mere rumor. The events that happen that night will forever change them...

MOMOKA is a RPG Maker Pixel Horror Adventure game made in RPG Maker 2003. It was made for IGMC 2018.

one true ending and one game over ending! it's a pretty linear game.

i can't start the game at all, when i press it it'll just say "cannot open system2c file" and even if i tried to restart it a couple of times, it still continued to say the same thing.

Is there an error message when you try to run the .exe? you shouldn't need the RTP to run the game

Let me first say that I enjoyed this game a lot. I think the art style is pleasant and the concept of it as a whole and the story of it are quite interesting. All in all, I'd like to see this game expanded upon. I wonder if you would ever have any interest in working on this game any further, as I think it has great potential to be made longer or have content added to it.

I think there are several aspects of your medium, a pixel rpg-style game, that could be further capitalized on to tell this story. As a game, Momoka felt a little text heavy, and a bit more like a visual novel with a movable character. One idea is that you could lean in a bit heavier to the visual novel aspect and perhaps add larger and more dynamic character art during dialogue. Otherwise, I find there to be a lot that could be expressed more visually. Something you hear a lot in writing classes is to "show, not tell," and while I think as a piece of writing, your imagery does a fine job at these, the medium which you've selected gives you a much more direct method to show the players what's going on. For instance, at times, a character will go into a room, and instead of showing that room on screen, there is just a black screen with text. If you were to ever update this game and make into a larger project, the player could enter the room and then examine various objects to find the same text / trigger events. I think there's good potential for corpse party-style still images to be added behind text during a lot of the cutscenes of text in this game.  (I am not suggesting you depict the sexual content - I very much appreciated not having to see that at all.)

The story was very interesting, though it sort of felt as though all of the exposition is thrown at the player at once when they read Sister Keiko's notes. It struck me as a bit odd that she would have left notes around explaining exactly what was going on in a place that they were unlikely to be found by anyone who didn't already know what was happening and would have a vested interest in finding Keiko and doing away with her. I think the notes idea is altogether solid, but perhaps the backstory could unfold more slowly and more subtly; the notes the player can find could be written more like journal entries. If she were to write them just for herself, she probably wouldn't just go out and say everything exactly how it is, as in she wouldn't be explaining to herself things she already knows. Readers/players love when they feel like they've pieced the mystery together themselves from vague information, even if it's still kinda obvious through the vague details. This also lends an opportunity for multiple endings based on how much information the player finds out. (Spoilers here, but: maybe there's a bad ending from not finding out accurately how to defeat the monster. the epilogue could be different based on whether or not Momoka finds out that she's the clone.)

Overall, the narrative path of this game is very straightforward (escape, find the notes, they lead you to the woman who can help, she takes you to where you can defeat the Big Bad) when I feel as though you have several opportunities for twists and turns - things that tell the player "oh actually it's not just that easy," and contribute to the hopeless atmosphere of the story. One of the first lessons of the game is "the story we've been told is actually a lie used to take advantage of us," and I think you have great potential to run with that as a theme. Reading the note about what's really going on you believe immediately which leads you into the arms of Sister Keiko, who as I personally played, I found myself distrusting because I thought it couldn't possibly be that simple that I had found the only nun that doesn't want to kill me. Especially with the dialogue from the other sister, that they were "only trying to protect" the girls, I figured the twist would be that Sister Keiko was the one truly under control of the monster, perhaps having run out of alcohol up in the attic, and that the horrid things done by the other sisters was somehow a better fate than what could have happened. When she told the girls to have another shot just in case, I thought to myself "This can't be good. She wants to get them drunk for some other reason." I think that the tone of this story would be very well suited by betrayal, and in fact, there are several parts that seem to already foreshadow it.

All in all, I liked this game. When I give such specific examples, I in no way mean to tell you how to write your own game. I'm not asking you to use any of these ideas. I just want to give insight into my thought process as a player, and perhaps give you a jumping off point to brainstorm and expand. This was an enjoyable experience, and it felt like playing a great demo for a great longer game.

hey!! i played your game and really liked it. i wrote a review of it: https://myvideogamelist.com/review/528/Momoka

i play your game and the song of kagome is in the game. is a nice easter eeg.

I downloaded the game but couldn't get it to start up.

Did a Lp of Momoka, plan to play more but here is first part:

I can't figure out a way to hide potential spoilers from others who look at this page, so I'll have to leave some of my comments out. Overall, I like the premise of the game. The pacing is a bit uneven, though, with the ending in particular seeming more ambiguous than I think was intended because of that. (Even just rewording the last few lines or adding another line might help with that one.) There are also some typos that might need to be addressed, though I didn't think to write them down. (A lot of them were misused homophones rather than misspellings.)

The short play length made it hard to fully differentiate between the characters, but I don't know there's much that can be done there. I have some thoughts about the character who I feel got the most development, but it may be a bit too spoiler-heavy to write here.

As for the content listed in the warning, the level of detail does feel a bit gratuitous. However, that might well have been intended, as a sort of Corpse Party-esque guro. It makes me think of slasher films, so I think that sort of audience would be the best target audience.

While I mostly focused on pointing out negatives and opinion-based things, I think it was a solid game for the most part. Going into the game, I expected a sort of supernatural horror story but instead got a more sci-fi or even cosmic type of horror story. It feels kind of like a B-movie due to the limited character development and graphic gore, but it's the good sort of B-movie in that it's still interesting to play.

If you make versions past v1.00, I'd recommend maybe looking into some of the typos and the final few lines. Also, it might be a good idea to prompt the player to save as the final scene begins, to keep people from losing a lot of progress by not realizing you can save during the scene.

At any rate, I hope some of these comments help, or are at least interesting to read. If there's somewhere where I can comment about the game without potentially spoiling new players, I also have one or two specific things I might have some thoughts about.

Very nice short game! The final area is pretty easy though. People who have troubles getting past that area heres an advice: create some distance between you and the alien, and then stop and face the pod and spam Z, repeat the process.

This game freaked me out, nice graphics and atmoshere (btw it would be nice if girls had more varied faces, right now they look like drawn from one template). Story concept is pretty interesting with whole school and alien thing reminded me a bit of misao, and i wonder how you want to expand it further^^

YO SAMEEE that's literally where i stopped lmaooo 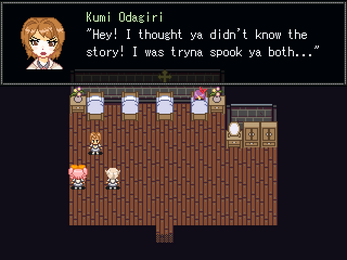 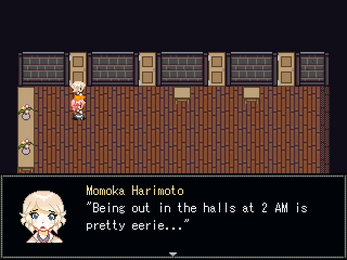 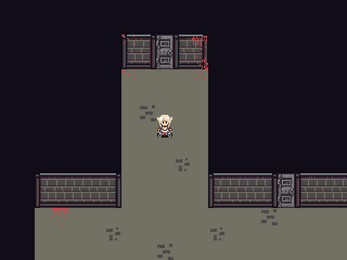 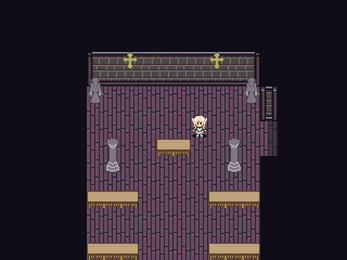